OUTNR. member Senja Boom shares her exciting story of a team of 23 students of the Eindhoven University of Technology who took the world by STORM, on the world’s first electric motorcycle. These are the high impact experiences that change high performers into true game changers!

Around the World in 80 Days on an electric motorcycle 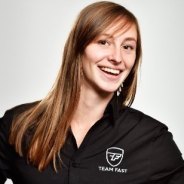 The title already gives it away. I was in STORM Eindhoven, where we built the world’s first electric touring motorcycle and travelled around the world in 80 days. A huge challenge for our group of 23 students from Eindhoven University of Technology.

The purpose was simple: We wanted to show the world what e-mobility is capable of. Electric automotive technology is advancing quickly, but people never notice the advantages. What people do see is the limited range, the long charging periods and the lack of charging stations. 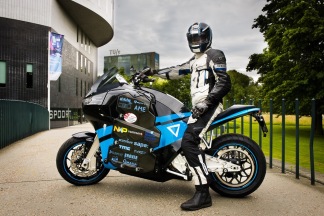 These objections became our design challenges. They drove us to build a motorcycle with a range of 400 km, that could be re-energized in a few minutes by swapping the batteries, and could be charged anywhere. To really make an impact, we set the challenge of driving 26.000 km around the world in 80 days, only charging at people’s homes, companies and universities. It took us over a year to design a prototype and build it, then another few months to redesign it and build two functional motorcycles.

While the technical team was building the motorcycle, the strategy  team was preparing everything necessary for our STORM World Tour. They arranged visa for 16 different countries, shipment for lithium-ion batteries on airplanes (where batteries are considered bombs) and a full schedule of events to maximize our impact, even in countries like Iran and Turkmenistan. They prepared us for every situation, since we all very much wanted to complete the 80 day tour and return healthy and alive. They managed all of it, and created an amazing tour through 16 different countries.

While others worked on the motorcycle and world tour, I was in the PR and sponsorship team. The first year was the hardest. Whenever we explained our challenge we received skeptical questions and the response usually came down to: “Come back later when you have built an actual motorcycle.” So that’s what we did. After the first prototype presentation new partnerships were found and I had to restrain myself from telling our previously reluctant partners: “I told you we could do it.”

All of our team members put their study on hold and spent two years in STORM Eindhoven. This was supposed to be divided in one fulltime and one part time year, but instead most of us spent fulltime hours in their part time year and weeks of 60+ hours in their fulltime year. I have loved and hated my job, I have pushed my boundaries further than ever, and I have learned more than I ever will in any other job or classroom. Even before going on our world tour I knew STORM would be one of the most amazing experiences of my life.

The STORM World Tour would start on August 14th 2016. The motorcycle was RDW approved a week before departure, our budget was reached two days before departure, and the strategy team only had time to pack their bags the day of departure. When the moment of truth finally arrived we were extremely relieved we had managed everything in time for the start of our tour.

I would love to tell you everything about  our tour, but this article would become a book before I could do so. I’ll stick to the behind the scene stories instead.  For all of our stories you can visit our youtube account or website.

The starting event in Eindhoven was huge and we were incredibly excited to be taking off. However, our excitement didn’t last long. Before we reached our first destination our motorcycle broke down, and it took all night to repair. We barely repaired it in time for the departure the next morning, only to have it break down again on day 2. This time repairs took longer. On day 4 we were all ready for lift off, but the motorcycle never even made it off the parking lot. We were desperate and about to give up when we received  a message from the team working on our backup motorcycle. The backup motorcycle, that had never driven before and had never been tested before, was working. We started off on motorcycle 2, and this motorcycle has driven the rest of the 26.000 km flawlessly. Skill, hard work and luck, you need them all.

After our nearly disastrous  journey through Europe we got to the Middle-East. This was the area of concern for most people, but it actually turned out to be the easiest part of our tour. We were extremely welcome everywhere, our hosts took great care of us and everything was arranged perfectly. We discovered that Iran is full of spirited young women with MSc’s in technology, who can’t find jobs. If I ever own a company and find myself looking for women in technology, Iran is where I’ll go!

In West China we were famous just for being westerners, and most people we met only knew one word of English: Selfie. We took hundreds of selfies and it took us hours to get through the crowd before and after each presentation.  In East China people do speak English, so you think you understand each other, which later turns out not to be the case. In Europe we believe contracts are agreements, in China contracts are considered to be the first draft of a potential agreement. One of our agreements concerned the transport of our batteries. We assumed it was all taken care of, but instead we discovered 2 weeks before our flight that in fact nothing was arranged and we would have to find our own way to transport our lithium-ion batteries across the ocean. We managed to get the batteries to one of our partners and onto a plane after a 2000 km detour to Shenzhen, barely in time to escape a storm that caused weeks of delay for all air transportation.

Arriving in America we assumed the difficult part was over. It turned out to be the opposite. We soon found that it is not poverty that instigates crime, it’s inequality. We had travelled through some of the poorest regions of the world without any problems, and on the first day on the road in the USA we encountered a drunk driver. Luckily no one was injured, but our car had to be replaced. A week later all of our car windows were smashed in and the contents of our vehicles were stolen. It took time to arrange new cars and get on the road again, but we got to the next events in time. In contrast to these stressful days, we had the most relaxing days as well. People from all over America invited our complete group of 23 students into their homes, provided food and beds and let us relax by their swimming pools. Their generosity still amazes me.

The final sprint, Paris to Eindhoven, was something I dreaded. Not because it would be difficult or dangerous, but because it meant the end of our amazing adventure. Our motorcycle was accompanied by a train of Tesla’s into our final event, where our parents, friends and fans were cheering us on. The feeling of coming home was mixed with a feeling of farewell and it was the most overwhelming moment I have ever experienced. We finished our final presentation in front of thousands of people, and then it was over. Back to  the lecture rooms.

We’re not done yet. We’re now working hard to spread the word and tell our story, to remind people what e-mobility is capable of, but more importantly, that anything is possible if you just do it. In exchange for these presentations aks a compensation so we can give the next team a headstart, but we are not sure what for. We are still looking for a new challenge for the next STORM team that can exceed the last one. If you know a challenge or want us to tell our story somewhere, let me know. We are ready to show that anything is possible.

click on the image to join the RizeClub on LinkedIn:

check your #FairPay Salary click on the dollar bill: